Real Estate Reflections for the City of Toronto – 2017 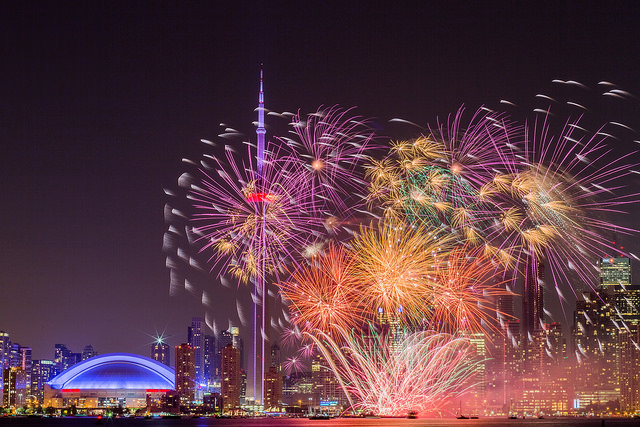 As you would expect, the close of another year brings a slew of articles and blog posts recapping 2017 and predicting 2018. And while I try to be different in my approach to real estate, this post will not be different. After the year 2017 was, this almost needs to be written.

2017 started out white hot. Almost from the turn of the calendar my phone started ringing and didn’t stop until July.  February through April saw most buyer’s acting like lunatics. The hottest properties were freehold homes, usually over $1million. It was not unusual to see a home listed for $899,900 selling for $1.3million or more. This usually happened within a day or two, even if the Seller originally wanted to wait for a certain day to review offers.

The main culprit was a lack of inventory. The reasons for the lack of inventory are harder to determine, but I will talk about that in my 2018 predictions. I can tell you that on March 15, 2017 there were just 1915 available listings in the City of Toronto. In March 2017 the City of Toronto sold 4343 properties. This meant that if no new listings were added, Toronto would have SOLD OUT in less than two weeks. This is why buyers acted like lunatics. Those that had the capital did what they had to do to get a home.

Just two months later, on May 15, 2017, the number of available listings in the City of Toronto had almost tripled, at 5236. This makes perfect sense to me when you understand supply and demand. The more valuable a product becomes, the more people want to enter that marketplace to sell a similar product. Do you think there would be so many Bitcoin alternatives if the price of Bitcoin did not skyrocket? Of course not.

By mid-May the lunacy in the Toronto market was already starting to subside when the Ontario government decided to enact changes targeting foreign buyers of real estate in Canada. This inserted significant doubt into many buyer’s minds and the market slowed to a crawl over the next 3 months. Sales volume in June 2017 dropped over 20% relative to May 2017. In 2016, the drop from May to June was under 5%. This reduced sales volume, on a year over year basis, has remained with every month since March 2017 selling fewer properties than the same month in 2016. Even April 2017 sold almost 5% fewer properties than April 2016. December 2017 sees a decrease of almost 44% in sales from November 2017 and down 15% from December 2016.

As you can see, 2017 started with a bang and is ending with a whimper. The 2017 real estate story includes changes to the way mortgages are approved as well. These changes, enacted in October, applies to all mortgages in Canada, not just to a specific market. The effect of this will be to hurt Canadians in places that are not Vancouver and Toronto. What will 2018 bring? 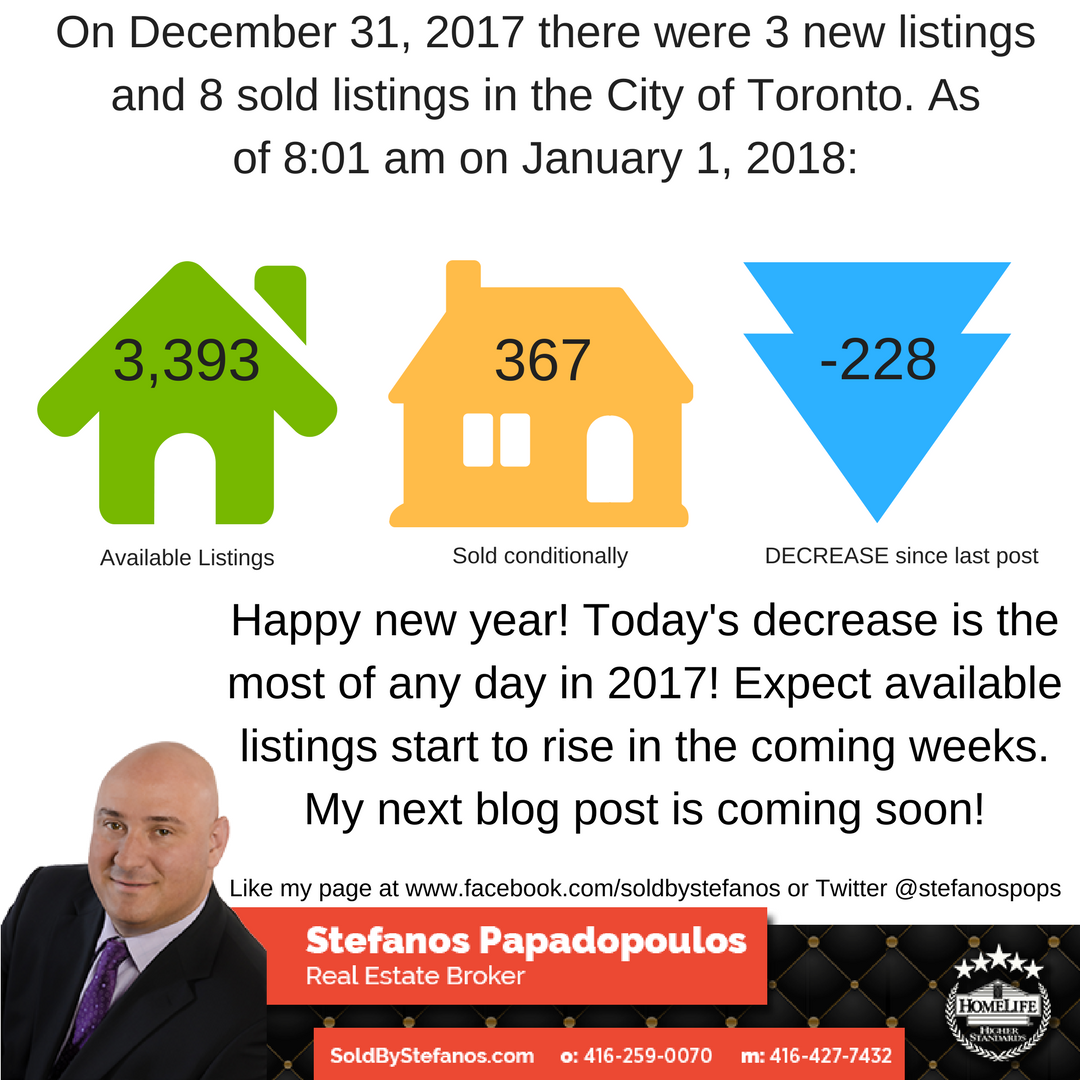 So what impacts supply and demand in the City of Toronto? I focus on two things: Demographics and immigration. Let’s start with immigration.

In speaking with someone at the Ministry of Finance, we talked about immigration. According to one of their studies, without immigration Canada’s population could fall to 12 million people within a generation. This is the result of the low birth rate amongst current Canadians.

There is a great article on the Stats Can site here: https://www.statcan.gc.ca/pub/11-630-x/11-630-x2014001-eng.htm. Take a look at some of the graphs and equate that to the Toronto real estate market. The 1990s were a black hole in the City of Toronto. Values had peaked in 1988. Since then the Toronto market saw significant decline through the 1990s. This chart, as found in the above Stats Can link paints the Toronto real estate picture almost perfectly when looking at the Migratory increase.

Population increases declined steadily from 1991 to 1998. During this time the Toronto real estate market remained flat. Then, in 1998 there was a spike in population increases, primarily through immigration, into Canada. While that chart stops in 2013, the trend continues with Canada welcoming over 315,000 new immigrants in 2017 and projecting to top 400,000 newcomers in 2018.

The Toronto real estate market has also been growing steadily since 1998. I bought my first condo in 1998 as a preconstruction unit at Yonge and Eglinton. I paid $186,000 for a 2 bedroom, 750 sq ft condo an almost 500 square foot terrace. Today that condo is likely worth in the $600,000 range. I wish I still owned that condo!

There is more to the immigration story. Canada employs a points system to determine who is allowed to enter our country. This points system gives preferential treatment to those who speak English or French, are university educated or have skills that are in demand in Canada. The result has been higher educated immigrants more likely to start their own businesses or become quickly absorbed into the work force. This also means they likely have the means to purchase a home, and the numbers bear that out.

Looking strictly at immigration, I would argue that demand will continue to be strong for housing in the City of Toronto, and the Greater Toronto Area (GTA). Almost half of all immigrants land in Ontario and the Golden Horseshoe. Where are almost 200,000 more people going to live in the GTA? If we don’t add enough housing to accommodate those people, then prices will go up as those with the ability to buy will buy, squeezing out those who can’t and forcing them to rent.

Demographics – The other half of the story

Immigration is only half of the story. The other half comes down to demographics. As our population is aging, there will be real effects on housing. Currently most baby boomers are empty nesters. Sure, there may be a few stragglers who didn’t start having kids until they were in their 40s, or worse still have 30 year old kids still living with them because they can’t find housing they can afford. But for the most part, they are becoming empty nesters rapidly. Further, the generation before them are almost all empty nesters.

So why does this matter? It is a question of utilization. One of the reasons that homes are so scarce in the City of Toronto is because many empty nesters have not left their detached houses in favour of smaller accommodations. This means there are many 4 and 5-bedroom homes being occupied by 1 or 2 people. This is simply not the highest and best use of this type of property.

For many empty nesters the decision to leave their larger home into a more right-sized home is not easy. Many don’t want to move into condos as they are used to living in a house their entire life. They are likely used to their existing community, like have a yard to garden, and more. So for many, the ideal choice is to move into a bungalow in the same neighbourhood.

This is problematic for 2 reasons. Since there are fewer 2-storey houses coming on the market, many people looking for a family home are bidding up the cost of bungalows to either tear down and rebuild as a 2-storey, or add a second storey to the existing house. This reduces the gap between bungalows and 2-storey houses. If they sell their home for $1,500,000 and buy a bungalow for $1,000,000 in the City of Toronto, they have not added $500,000 to their bottom line (when they likely don’t need it anyways). The cost to move will be about $120,000 between land transfer taxes, real estate commissions, lawyers, moving companies and more. This hardly seems worth it to many. Instead, they would rather spend $30,000 and install an elevator in their existing home if stairs are an issue.

Until those in an advanced age start vacating their larger homes and right-sizing the GTA will continue to see a crunch in housing. Add to this the fact that the GTA has a low population density for a city of its size. We are a sprawling city with large houses, as opposed to a concentrated city with smaller houses, townhouses and condos. It is true the downtown core is all condos, but a quick skip beyond Dufferin or the DVP and the lot sizes get larger.

If you review my posts, I have always maintained that as long as people find or create employment for themselves in the GTA, then prices will continue to increase. Further, as long as people all over the world view Canada as a destination then our large cities will continue to face increases in pricing. Lastly, without people right-sizing, and the population density increasing, then the only place real estate prices can go is up. Once I see changes to any of these you know I will post about it!

This website is operated by a brokerage or salesperson who is a member of The Canadian Real Estate Association.

The listing content on this website is protected by copyright and other laws, and is intended solely for the private, non-commercial use by individuals. Any other reproduction, distribution or use of the content, in whole or in part, is specifically forbidden. The prohibited uses include commercial use, "screen scraping", "database scraping", and any other activity intended to collect, store, reorganize or manipulate data on the pages produced by or displayed on this website.